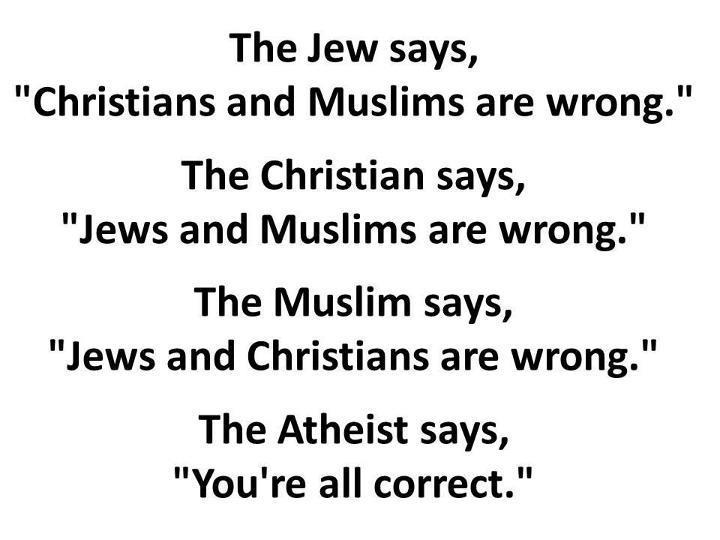 Perhaps the Overwhelming Majority Is Right

In his article called “Only A Minority Is Right,” J. H. McKenna Ph.D. argues against religious truth.

His argument is based on the diversity of religious belief.  First there was polytheism, then their was monotheism along with “several sects and denominations of monotheism,” then there came “other new religions” and “several thousand denominations and new religions.”  This story tells, according to McKenna, that “there is no uniformity in religion and no majority religious opinion” (italics mine).   His point is that, “In religion, your view is inevitably a minority view.”

McKenna concludes: everybody, or almost everybody, is wrong. You can’t, therefore, look to religion for truth.

But what if there were uniformity in religion? Would that be a source of truth?  What if there is a majority religious opinion?

Billions and billions of people for millennia, regardless of other more particular religious claims, have held to a single belief.

That belief: There is something and/or someone beyond the physical world, something bigger than we are–the transcendent.

Until recently, all religions have held that, out there somewhere, there are gods or a spiritual force or God.

Now, in Western societies, we have floated the idea that we–that is, human beings–are god or that nothing is.

It is only recently that this alternative has been proposed, and it’s been catching on because the conditions are currently just right for us to believe such a thing.  Growth in the belief of human autonomy may or may not continue.  Right now, the number of atheists and agnostics numbers in the low, very low, hundreds of millions.  This up against the billions and billions of human beings in a wide variety of circumstances and conditions that have all  believed in a transcendent reality.

Perhaps this much agreement across so may centuries and cultures might be, at least considered, a source of truth.  I thought I picked up in the article, that McKenna suggests that this sort of unity in religious belief might carry some weight.

McKenna has missed this unity in human thought, present since humans started thinking, but he’s not wrong in his call for dialogue and respect between the more particular beliefs about the transcendent reality.  Not because most of us are wrong, but because we all look at reality through very particular cultural lenses.  It’s always a good thing to try to reduce the tint a little.  We have much to gain from meaningful dialogue with other places and with other times.

Theme by Anders Norén — Up ↑